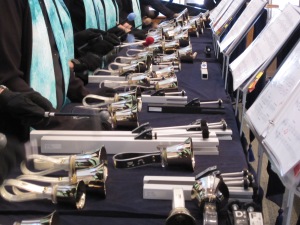 I’m a bell ringer.  You may have never heard of bell ringing.  You may not even know what I’m talking about.  Let me explain it for you.  I ring English handbells.

It all started in 1991.  The church I went to was given a 3 octave set of handbells in the summer of 1990.  In the Fall, the handbell director started a youth bell choir.  Then in January, he started an adult choir.  Not knowing anything about how to play them, I signed up!  I’ve been playing ever since.

I still remember the first time we rang in church.  My knees were shaking so hard, I thought I would fall down.  But we made it through whatever song it was.  And it got easier each time.

A few years later, four of us decided we would form a quartet.  Music is specifically written for ensembles and the quartet music was divided so that each ringer knows which bells to play when – the four of us needed to share ringing 3 – 4 octaves.  Once again, not knowing anything, we chose a song based on the fact that we knew it and we liked it.  We later figured out that we spent 68 hours practicing that song before we rang it in church.

One of our favorite events was the annual “Bell Sunday” we presented.  The bell choirs (adult, youth, and quartet) organized and rang the whole service.  If you ever wondered how hard it is to pull off a Sunday worship service, it’s hard!  Choose a topic, choose scriptures to go with it, choose music to go with it, arrange for the children’s sermon, ushers, acolytes, liturgist, AV slides and a script for the AV booth.  And we particularly learned how hard it is to accompany the congregation while they sing.

All this just means I’ve been ringing for 23 years – 14 of those years in two choirs.  We’ve all gotten a lot better, learned many techniques,  been to bell camp, played with 200 other ringers at Spring Ring, and generally had fun.

When we moved, I thought that was the end of my bell ringing.  I handed over my music and gloves, found a replacement for the quartet and figured I wouldn’t be able to find a new bell choir.

Thank goodness for the internet.  I found Sardis Presbyterian – and they needed a sub.  One ringer was visiting her daughter in India so I stepped in for her.  When she returned, another ringer said she would not be available to play May 4, so I stepped in for her.  I guess I shouldn’t mention to them that the thing I am worst at is sight reading. So far it’s working out.

Once again, I’m a bell ringer.

I'd like to hear from you. Leave a reply. Cancel reply