Once upon a time I started a foodie group at my church.  We had a wide variety of interests and skills in our group.  Some were adventurous cooks, others were there to learn how to cook.  One lady came because she wanted an evening out. 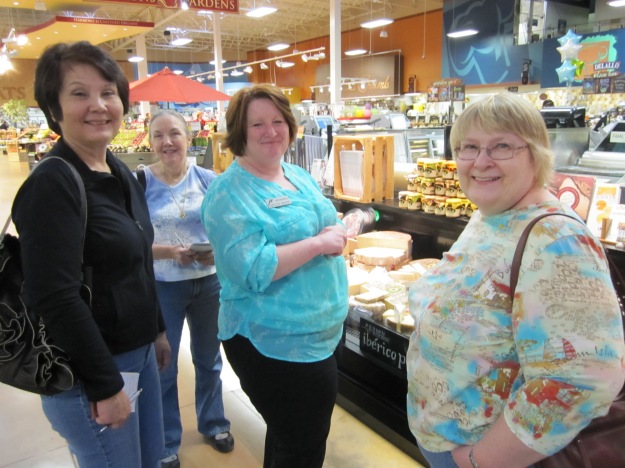 We had a variety of events.  Our first outing was a cheese tasting class offered by a local supermarket.  We had a local couponer speak and explain his system.  We set up an assembly line and created homemade tamales.  We had a kitchen gadget swap.  A church member who worked at Sprouts Farmers Markets let us taste some of their healthy items.  We sponsored the coffee fellowship time after church with all homemade items.  We had field trips to kitchen stores.  And we went to dinner.

One member (one just learning how to cook) had her father recently move in with her and she asked me to make him his favorite dessert – a rhubarb pie.  I’d never made one but figured it couldn’t be too hard.  Harder was finding fresh rhubarb in Utah.  Lo and behold she called me one day shortly after her request to say she had found some at the grocery store and would be bringing it over.

So the hunt was on for a recipe.  The one I settled on was from “Simply Recipes”.  I was especially intrigued by the meringue.  It included a corn starch gel to help keep the meringue soft and high.

For the crust I used America’s Test Kitchen’s vodka recipe.  You basically substitute two tablespoons of vodka for 2 of the tablespoons of water.  Because the flour does not absorb the vodka, you get a flakier crust.  It really does make a difference.

And I think the pie was a success.  Here’s the proud recipient having a slice. 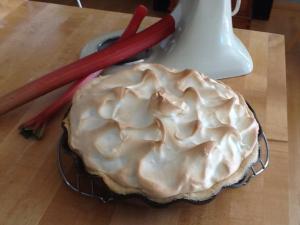 Make crust. Heat oven to 350°. Line pie shell with aluminum foil. Fill two-thirds with pie weights.  Bake for 20 minutes. Remove foil and pie weights from crust. Poke bottom of crust all over with tines of fork. Return pie crust to oven, bake for an additional 10 to 15 minutes, until lightly browned all over. Remove from oven and set aside.

Put pan on stove on medium heat. Stir in instant tapioca. Slowly heat until steamy.  Gently cook rhubarb until it is a little tender, but not yet falling apart.

Meringue:  Preheat oven to 325°. In small bowl, whisk together sugar and cream of tartar and set aside. In small saucepan, whisk corn starch and cold water together until corn starch is dissolved. Heat on stovetop and whisk until mixture gets bubbly and forms a gel. Remove from heat.

Place egg whites and vanilla in bowl of electric mixer. Start on low and gradually increase to medium. Once egg whites are frothy, slowly add sugar and cream of tartar mixture, one tablespoon at a time. Beat until sugar is incorporated and mixture forms soft peaks. Add cornstarch mixture, one tablespoon at a time. Increase mixture speed to high, and beat until mixture forms stiff peaks. Be careful not to over beat.

Filling should be hot when meringue is added. Pour rhubarb mixture into pie shell, spreading it evenly. Using a rubber spatula, immediately spread meringue mixture evenly around edge and then center of pie to keep it from sinking into filling. Make sure meringue attaches to pie crust to prevent shrinking. Create peaks over meringue.

Bake until meringue is golden brown, about 20 minutes. Transfer to a wire rack and let cool to room temperature. Pie can be refrigerated, but it is best served same day.

I'd like to hear from you. Leave a reply. Cancel reply